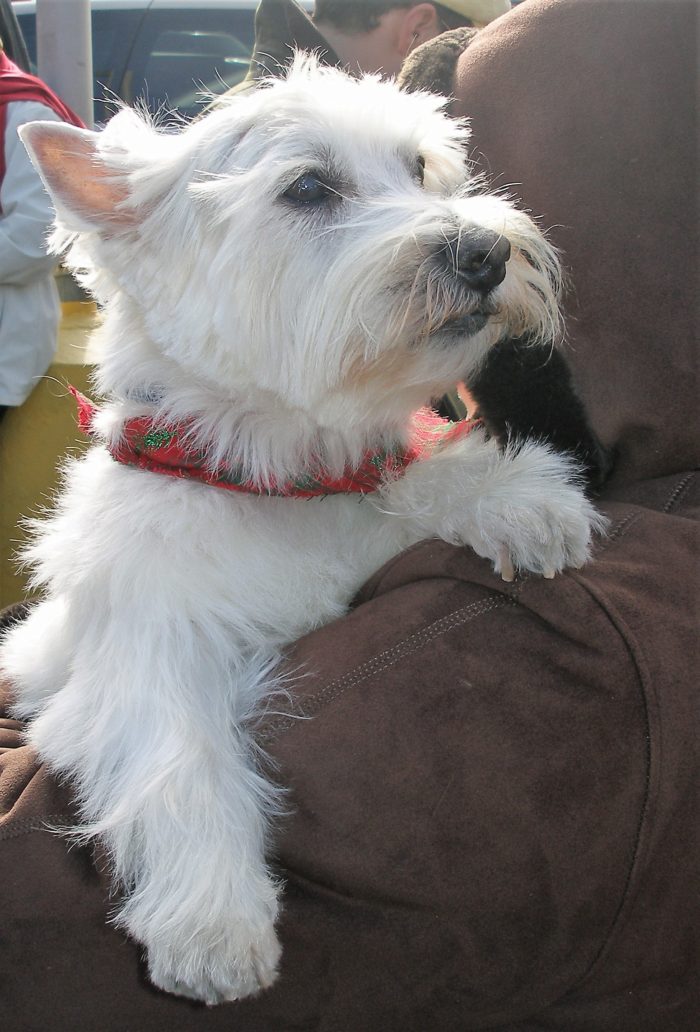 GOOD BYE “GENERAL WESTMORLAND” YOU WILL BE MISSED FOR A LIFETIME.

Many of you have heard me tell the story of the call I received many years ago from a US Army command officer who was being transferred to the Middle East.  She asked me to find just the right home for her little solider of a Westie named “General Westmoreland” (Wes for short).  I picked up Wes the next morning at the officer’s home in the Mount Vernon area of Northern Virginia. After a short conversation over Wes’ next steps in finding a new home, it came time to say goodbye, she held back the tears that come from seeing her beloved little guy leave her side for the last time, a place where he stayed faithfully for 11 years.  Both were obviously best friends and each would find this transition hard.  I have only had one or two Westies look back over their shoulders and cry out for their owners as I drive away.  Wes’ was one that took my heart away in pain.  As I pulled away from the home, Wes looked out the window and gave one of the most heart-full cries ever heard.  Soft, deep inside, little moans as he saw his home drop away in the rear window. I put my arm around him as he sat in the front seat and whispered “it will be alright”, as I drove on.

I brought Wes to my home here in Arlington and for the next 12 hrs Wes was at my heels waiting to be held and/or to sit next to me in my home office.  As night fell, Wes and I slept together on the couch; his body tucked up in my arms totally contented.  He slept that way all through that first night away from his home.  I knew right then and there that this little one needed a special home where he could be that constant companion and faithful best buddy.  I combed our applications until I came across Lynn’s application.  Lynn is 60 years old and stricken with MS.  Her application requested a gentle Westie to replace her own Westie “Dickens” who had passed away.  Lynn needed a slow gentle Westie as her walking skills are taxed and her strength is almost gone.  She requested an older Westie who would be cared for the rest of his life and want for nothing in the form of love, affection, and medical care.  After speaking to her by phone, Wes and I went for a visit; during the whole drive time I was worried that Wes’ age would be an issue.

After meeting the adopted family and seeing Lynn’s instant connection with Wes and he with her, I knew that Wes had found that special home I was entrusted to find by his owner, a trust I took seriously.   The clincher was when the two of them went for a S L O W walk around the cul-de-sac sidewalk, Wes stopping to sniff and mark a few key locations, Lynn had a chat with some neighbors, and a wave to others in their yards enjoying the cool evening air.  They looked like they had been making that walk for years, happy in each other’s company, happy for the chance to once again see and feel alive.  Over the next few days Lynn and I spoke about how Wes was fitting in to their lives.  How Wes blended into their routines, the daily snuggles, the naps on the couch, the slow walks, the second nap in the afternoon, and the dog friendly backyard.  Each “Home Report” conversation was full of glowing comments on “how good Wes was” and “how smart he is”, all good signs that Wes was again in the RIGHT HOME.

For more than six years Lynn would call every few months to provide an update on their activities and to confirm that Wes is indeed a well loved and cared for pet. Every Scottish Christmas Parade I would see Wes and Lynn together standing or marching along through the streets of old town Alexandria in the cold or rain as if to say “we are here and we are VERY happy with each other”.

A few weeks ago, I received a call from Lynn to tell me the sad news that comes way too often in the last few years.  Wes was beginning to wind down and his body was taking on more hits that he could recover from. Below is the end of that struggle and of a bonded friendship that lasted way too short.

A little background, I have been helping Westies for going on 25 years find that second chance at life.  One they would love to grow into, a life that would fulfill a dog’s dreams of a great life.  Westie Rescue has helped over 1,100 Westies here in the MidAtlantic area during that time.  Some touch my heart in ways I cannot forget.  Their stories always bring a tear to my eye as I pull bring up the memories from my mind and I see them once again alive, eyes sparkling, mouths open with a smile, happy once again with their owners and help Westie Rescue provided.

God’s Speed “General Westmorland” you will be missed for a lifetime.

I write with a broken heart to tell you my beloved Westie, little Wes, a.k.a. General Westmorland, fought his last battle yesterday.

Jim was up with Wes all night of the 5th.  We knew that something had happened inside his little furry body, when he would take no food or water and was vomiting all night.  Yesterday morning around 9:00 before we could get him to the vet, Wes had a grand mal seizure.  We immediately took him to our trusted vet’s office that is close to home and had treated Wes over the years.  They immediately drew blood, and got an IV into him to try and replace the fluids he had lost over the last twelve hours.  I stayed with him at the vet so I could talk with her when she came in a short time later.  The blood analysis came back around 11:00 which revealed that his blood chemistry values were mostly out of the normal range and one for his liver enzymes was too high to calculate.  A series of x-rays taken later in the day showed unknown masses in his stomach and probably some liver damage as well.  To make him more comfortable, they gave him a saline IV and antibiotics to try and deal with the medical problems he suffered from the previous evening. The vet asked us to come back around 7:30 in the evening to take Wes home.  Once we got there last evening, we met with the vet wherein she relayed that Wes had had at least three more seizures they knew about during the course of his stay with them at the clinic.

Jim had Wes in his arms bundled in a large beach towel and blanket to protect him from the chill of the outside air to take him home.  However, before we could leave the office, Wes had another major seizure in Jim’s arms.  Knowing what would lie ahead for the next twelve hours, and the vet saying Wes’s condition would most likely get worse, i.e., more prolonged seizures, and not get better medically, Jim and I then made the heartbreaking decision to ask the vet to put Wes to sleep.  Jim gave me the little pup to hold in my arms as the vet went to get the serum.  I cried as she administered the serum into Wes through a catheter that had been used for his IV that day.

Several minutes later, our loving Wes passed away in my arms.  I pray that in those last moments of his physical life with us Wes heard my whispering into his ear, “I love you Wes”.

Steve, thank-you for bringing Wes into our family in March of 2005.  Little Wes has been such a precious joy in our lives over the last six years.  The amount of comfort and love he gave over those years to our family is truly immeasurable by any standard.  The little guy was a magical and loving tonic for me.  How many countless hours did we spend together watching TV and napping in the chair!  How his high-pitched barks would get my attention (most of time) saying, “I need to go out NOW”, or “feed me, feed me”, or “Lady of the house, just cuddle with me because I miss your warm lap”!   As with our previous little Westie, Dickens, we pray that Wes and Dickens, and Duffy also, are chasing squirrels, taking warm comfortable naps in the sun, and eating lots of peanut butter laden doggy treats.  God has to have a doggy heaven for those little souls that brought so much joy, comfort, and life to our family here on earth.  I know of three little souls that are now resident there under God’s watchful countenance.

3 thoughts on “Sad News from an Adopted Westie’s home”

Westie Rescue USA is a national clearinghouse for all things Westie Rescue. It is sponsored by Westie Rescue of the Mid-Atlantic States, Inc., a 510(c)(3) nonprofit organization.